I spent 6.5 years in Ankara.  Before moving there, one of the most difficult things I could imagine was celebrating American holidays without my family.  Even harder, would be celebrating Thanksgiving since it is not a holiday at all in Turkey!

It has been two years since I returned to the States.  Looking back, my Thanksgiving celebrations in Turkey turned out to be some of the best times I had as an expat!

Here is a link to my 1st Thanksgiving in Turkey, An Expat Thanksgiving.  It was 2010 and sweet potatoes were impossible to find!  Funny story about the sweet potato pie.  As you will read in that post, I had to think outside of the box.  I mashed potatoes and pumpkin as if they were sweet potatoes.  I added the required spices.  I picked through bags of pink and white marshmallows, topping the pie with the white ones.  It would have worked if I had not forgotten the golden rule:  make sure you push those marshmallows down at least half way!  By the time the dish finished baking, most of the marshmallows popped out and exploded in the oven!  What a mess.  Click on this link to see the pics from that first Thanksgiving Dinner Party.   Two Birds!  (Note that if you go the route we did, inviting a lot of Turkish friends to dinner, you should expect that someone will bring Stuffed Grape Leaves!  It’s all good!)

Here’s another link to a post on Thanksgiving Gratitude.

2011 was a tough year.  One year after arriving in my new homeland, my family almost lost my sister Mary to an aneurysm.  Honestly, the surgeons said there was absolutely no medical reason for her survival.  She is our miracle for which we are very very thankful!

So that year, I accepted an invitation to join my young American friend for dinner at her Ankara home.  In my blog post from 2011, I mostly compared our plan to how my family celebrated Thanksgiving back in the States, My Second Thanksgiving in Turkey.

This year, I am sharing Thanksgiving with my Ankara bestie, my kanka, my little sister, Jules – my American best friend in Turkey.  We are cooking a small dinner together on Saturday.  Our plan is to shop together on Thursday,  prep together at my house on Friday night, cook together at her place on Saturday, and have dinner Saturday night at her house.  …  just Turkey, stuffing, gravy, green beans, mashed potatoes, brussel sprouts with chestnuts, creamed onions, salad, and pumpkin and apple pies! … While prepping, we will listen to music, tell our stories, and drink lots of wine.  Just like old times at home.

Ha Ha!  Yeah we did!  We cooked, drank wine, and then we went out in my neighborhood!  We had a blast at a local bar.  It felt just like the night before Thanksgiving in good old West Chester!  We had a great time the next evening at Jules’ place for dinner.  But I admit, I missed hosting.

So in 2012, we did it again!  This time, my husband and I had at least 20 guests for dinner.  Here is a link to the post with pics, Thanksgiving Success. and another on decorating for the holiday, Getting my Craft on and the Thanksgiving Holiday.

2013 proved to be another difficult year.  I was working full-time as a Business Development & Marketing Manager for a large international law firm that had an office in Ankara.  By November, I had taken a leave of absence to become a full-time caregiver for my sister Eileen in the U.S.  I spent a quiet Thanksgiving at Mom’s.  But the night before was one to remember!

I had left my sister’s home in the late afternoon as it started to snow.  My brother Billy’s house was along my “back road” way home.  I stopped by, making sure to call Mom and convince her it would only be a short visit, that I would be careful, not drink, and get home soon.  Ha!  Billy pulled out wine, olives, cheeses, more wine, and some things I will not mention here.  We were having a good old time considering what the family was going through.  He asked me to stay.  I said no, a thousand times NO!  Mom would kill me!  After all, the old girl needed help early in the morning with our Thanksgiving meal.

So what did Billy do?  He pulled out a steak.  Not just any steak.  He prepared for the grill the biggest damn steak I had ever seen!  I called Mom.  I told her I was spending the night and I would be home early.  Dead silence on the other end.

Billy and I continued our partying. 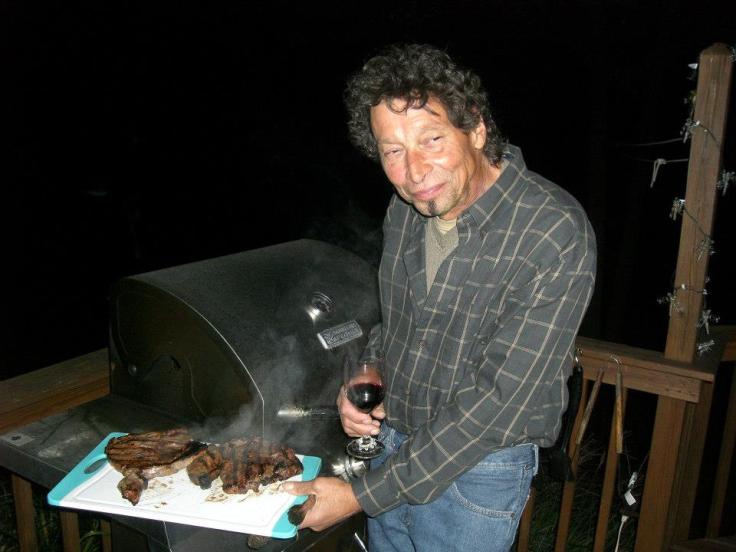 I awoke early the next morning.  I planned to be at Mom’s by 8 a.m. at the latest.  As I was about to leave, another family member had arrived.  He appeared to be partying a “little” later than we were and was still in “happy” mode.  He proceeded to provide me with alternative stories for Mom.  Ha ha ha.  None of them worked.  Mom did not speak to me for a good hour.  She finally caved and we had a heart-warming meal together.

We lost Eileen about 2 weeks later.  Here is a pic of Eileen when she visited Ankara:

Sadly, I have no recollection of Thanksgiving 2014.  No blog posts.  No photos.  I believe I was in Ankara.  I had visited the States in September, and another sister came back to Turkey with me in October.  I was at the Istanbul marathon just weeks before Thanksgiving.  I have this post on finding the elusive sweet potato in Ankara, I spy . . . sweet potatoes!  This all makes me want to believe I cooked a big-ass meal, became exhausted, and never bothered to snap a photo.  But it’s more likely I sat this one out for some reason.  If you know more, please share!

In 2015, we celebrated our final Thanksgiving dinner in Ankara.  We left Turkey in October of the following year.  Again, I never posted photos.  I’m not sure why.  Perhaps it was because of all the terrorism happening around me.  Perhaps I was just busy and tired.  In any event, the party grew.  We had at least 30 guests that year.  Below are some of the photos.  Our friend Aysegul was in the US at that time, so we had fun with “Flat Aysegul.” 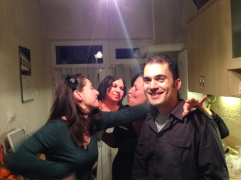 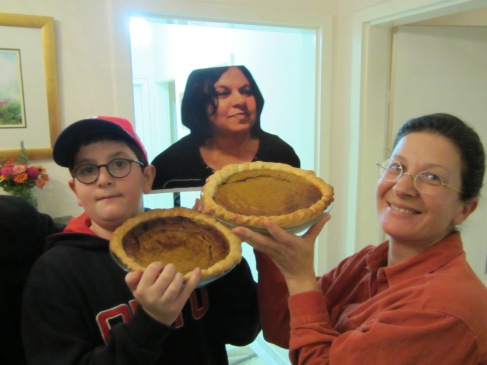 Thanksgiving!  Even though there’s a lot of bad history there (the slaughter of native Americans), it is still my favorite holiday!  A time to give thanks, catch up with old friends, share an awesome meal, and kick back to some Arlo Guthrie!  This year will be another hard holiday.  We lost Billy too and Thanksgiving will be exactly 6 months to the day.  But we have a lot to be thankful for as well.

The moral of the story?  Don’t be afraid to share your holiday with the Turks!  Think outside of the box when it comes to cooking.  Have a fabulous Expat Thanksgiving!