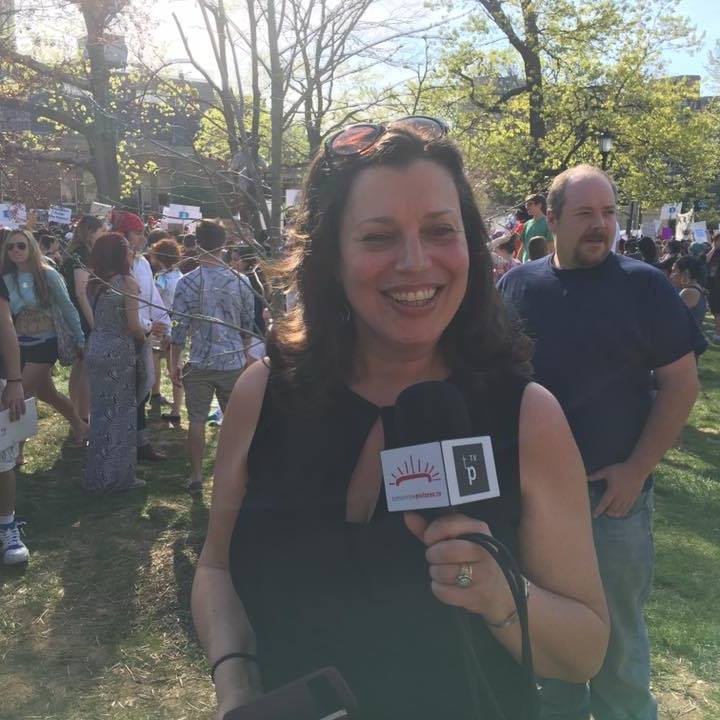 I am visiting West Chester, PA.  On my first day here, I had the opportunity to visit the Trump rally at WC University.  Stop right there — I am a firm DUMP TRUMP person.  I can’t even imagine life in a world where that guy is the President of what already is one of the greatest nations in the world.  I was there to learn why he had so many supporters. 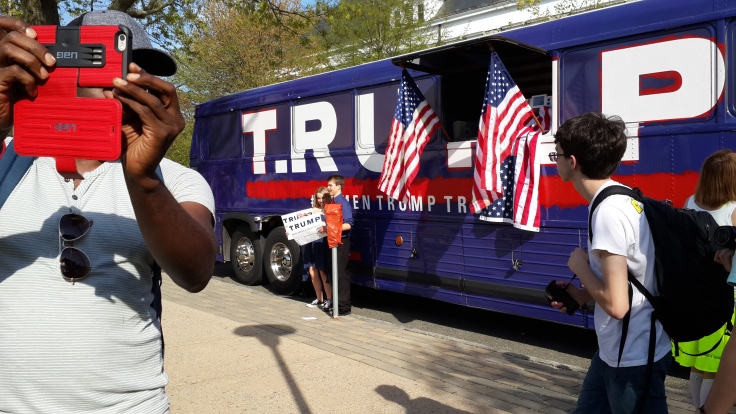 Microphone in hand, I set out with TomorrowPictures.tv to interview the crowd, both for and against the man.  It was thrilling to be there, but so many emotions swept through me.  Happy.  Sad.  Outraged. Dumbfounded.  After a couple of hours, I finally felt it.  I became afraid. 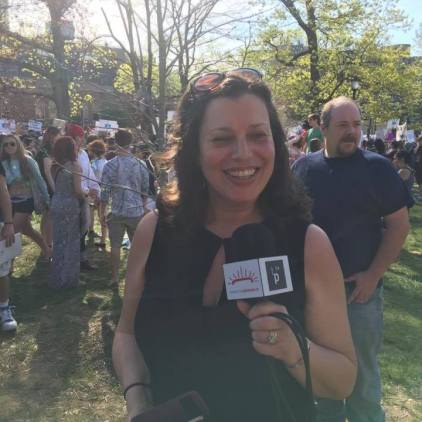 We were interviewing a young woman, a student from WCU, who had a lot to say.  She was anti-Trump. She was angry that the university allowed this man on campus, at the last minute, just before final exams, disrupting their lives with “hate speech” – speech that has zero tolerance on campus.

As we talked, we stood behind the crowd that had gathered to protest Trump.  Signs, signs, everywhere were signs.  Across the small suburban tree-lined street, stood Trumps supporters.  The middle of the street was empty and lined with police. 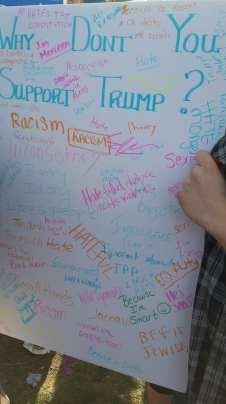 It was then that I realized what I was doing.  I felt the fear.  I knew already knew what gas in the face felt like.  I heard the U.S. Ankara Embassy’s security warnings play over and over in my head, “Even demonstrations intended to be peaceful can turn confrontational and escalate into violence. You should avoid areas of demonstrations, and exercise caution if in the vicinity of any large gatherings, protests, or demonstrations.”  I shouldn’t be here . . .

My thoughts turned to the bombing of the peaceful protesters outside of the Ankara train station that killed at least 102 people.  The attack on the service buses in Ankara where at least 28 innocent people, on their way home from a hard day’s work, lost their lives.  And the most recent, the people killed by a car bomb as they stood waiting for a bus.  At least 37 died in that attack.

And yet here I was — where I wasn’t supposed to be.  I looked into the woman’s young and idealistic eyes and asked the next question.  “Are you afraid to be here today?”  Of course, I did not get the answer that I would have had we been standing at METU University in Ankara.  After the interview was over, we chatted a bit and I told her why I asked that question.  I am from Ankara . . . three recent attacks . . . live in fear . . . shouldn’t attend large gatherings.  Oddly enough, this red-headed activist was of Turkish descent.  We connected.  We felt each other’s pain, each other’s fear.

We are both afraid of what’s to come in the U.S., the possibility of a president who instills in his citizens hatred of Mexicans, women, and so many more.  A man who wants to build a wall . . .

I know a Trump supporter who has a great fear that his “white” daughter may marry a black man.  Ooooh, scaaaaaarrrry.

Just then, the chants exploded.  “Build a wall.”  The crowd on our side of the street turned their backs to the Trump supporters and responded . . .

11 thoughts on “Life in the New World”