Did anyone else notice that the Pope visited Ankara last Friday?

I learned of the Pope’s visit Friday morning.  Upon hearing the news, come kind of warmth came upon me.  I got excited!  I learned that he would be visiting Anitkabir and had a few other stops.  But no schedule was posted anywhere.  Not even the folks at the Vatican Embassy knew.

As I was eating lunch, I saw on the news that his flight landed!  I got more excited, hopped into a taxi, and was on my way to catch him at Ataturk’s Mausoleum.

It was a big disappointment.  Even though I called ahead to ask whether it would be opened to the public, I found that it was not.  I waited on the street, being directed back and forth by police.   They said he would come along this route and I would see him.

I was one of about 20-30 people, none of whom were there to see the Pope.  I think they were all just waiting for Anitkabir to reopen.

They lied.  I suppose it was for the Pope’s security.  I am saddened by a country that has a need to hide the Pope’s visit for “security” reasons.  Why can’t we all just get along?

After leaving through a back gate, I did manage to capture the mayhem of cars speeding down a road on film – and later in the evening, was able to identify that containing his Holiness, although I could not see him in the window.

At least I was able to call my mother and tell her he was close enough that I could have reached out to touch his car. 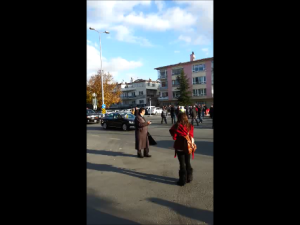 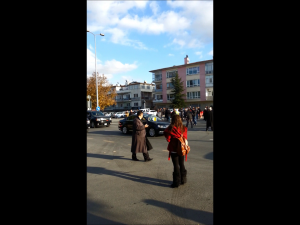 Sure, I can make a plan to see him in Philadelphia next year –along with a million others.