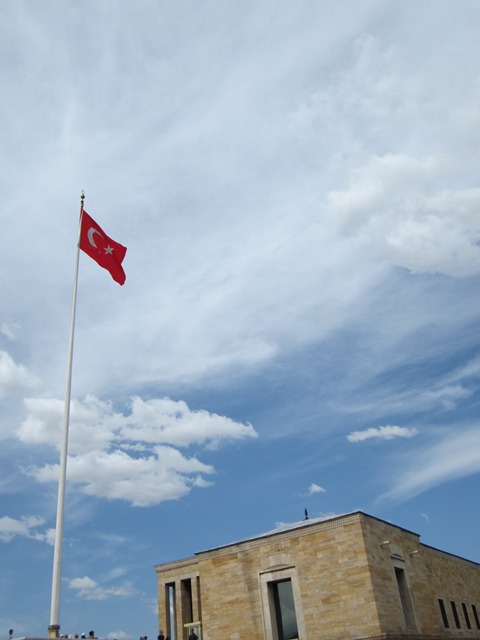 May 19th is an official holiday in Turkey.  No, they don’t celebrate Malcolm X’s birthday!  The date is officially dubbed, “Youth and Sports Day.”

More importantly, May 19th is the day that  Mustafa Kemal (a.k.a. Atatürk, founding father of modern Turkey) landed at Samsun, which is regarded as the beginning of the Turkish War of Independence.

This year’s celebration became a big political mess.  The current government decided to change the way the celebrations had taken place for years.

Official ceremonies and military parades were replaced by civilian festivities this year, with people taking to the streets and public squares to mark the day. . . Until this year, militarism had been at the forefront of the May 19 celebrations. High school students used to parade in military formations in perfect precision in stadiums and perform athletic routines. Military troops also used to parade, with generals attending ceremonies in big cities alongside politicians. . . Prime Minister Recep Tayyip Erdoğan said May 19 had finally become a festival for the nation. “Tanks and troops no longer parade [to mark the day]. Now there are festivities. The youth are in the streets [for the celebrations]. Now May 19 is a real festival. Older celebrations used to recall those of iron curtain countries. May 19 is now a symbol of change and transformation.” The prime minister’s remarks came as he received youth representatives from 81 Turkish provinces and the Turkish Republic of Northern Cyprus (KKTC) at the prime minister’s office on Saturday morning.

The new style of celebrations came as part of the Justice and Development Party (AK Party) government’s efforts towards normalization and the elimination of military influence from the education system. The Ministry of Education issued a circular early this year cancelling the May 19 celebrations in stadiums. Instead, the ministry said, the celebrations would be held in public squares to provide a chance for more widespread attendance.

The written word makes it sound like a good thing, and that it was a joyous day throughout the country.  It was not – not completely.

The local television news stations, while way too sensational for me, showed physical fights breaking out throughout the country.  It is in fact, the military who keeps the country “balanced.”  The military is the biggest supporter of Atatürk, protecting the laws of modern Turkey.  This seems a bit foreign to one who comes from a western society.  But in Turkey, the military is needed in other ways than a westerner would imagine.

While no government is perfect, the current party (AKP) leans far to the right and mixes religion with everything.  I have no problem with basic tenets of religion.  But I generally don’t believe it belongs in government.  I have to add though, I do also find that sometimes the so-called separation of church and state in this “secular” society goes too far – such as banning the head scarf from government properties.  This was likely law before the current party came into power.

This year, the Ministry of Education forbade people from celebrating in ways that they wanted.  Harmless ways.  The “civilian celebration” was completely prescribed by the government.  It just simply switched hands from military to government.  It was not a “people’s celebration” to the extent that the population was not permitted to celebrate as they wished.  For example, at a local university (owned by the government), students were forbidden from hanging a wreath on a statue of Atatürk.  Seriously?  A wreath!  What harm could that possibly cause?

Kemal Kılçdaroğlu, leader of the main opposition Republican People’s Party (CHP), joined the celebrations in the Black Sea province of Samsun, where he criticized the government’s decision. “Since when do people need permission to remember [Mustafa Kemal] Atatürk?” said Kılıçdaroğlu. “We know to challenge every kind of oppression, no despot regime has survived.”

On Saturday, my husband insisted on visiting Anıtkabir, a beautiful historic museum and the mausoleum of Atatürk.  It is one of the most visited tourist attractions in Turkey, set on a high hill in Ankara.

I had been several times and did not at first see the importance of this visit.  But I went along.  When we arrived, I really didn’t want to be there.  Parking was closed except to a select few – the diplomats!  Surprisingly, we rather quickly found a spot on a crowded neighborhood street.

Then there was a long line to get through security.  Oddly, that also moved quickly.

The walk up the hill was also enjoyable.  It was a gorgeous day with a light breeze.  The grounds of  Anıtkabir have always been well-maintained by the military with green grass and flowers everywhere.

Once inside the courtyard, I was stunned by the long queue of those waiting to pay their respects.  My husband wanted to get in the line.  I was annoyed.  We had just come from the pazar and there were bags of veggies in the hot car.  I told him to go – and promised to wait, but only for an hour.

I snuggled against a wall on the grand staircase and pulled out my camera.  Taking shots of this and that, my attention was grabbed by an impromptu group of mostly college-aged kids, who gathered in the middle of the stairs and began singing to commemorate Atatürk.  With no police around to enforce the AKP decision, the group was not interrupted during their personal celebration. (Sadly, I am not so familiar with my new camera.  I thought I had recorded for you but only got one sorry shot.)

During this display, something touched my heart.  My husband being here meant something.  It was important to him.  I gazed across the courtyard and was amazed that I could pick him out in that long line.  He was still far away, but at least he had made the final turn of the long winding line.

What is important to him is important to me.  So I got up, climbed down the stairs and joined him in the line.  I was amazed by how orderly this line was. Except for a few who jumped in front, this was so untypical of Turks who usually push and shove to be first.

Atatürk will not be forgotten and his life will be celebrated by Turks in any way they choose, regardless of what the government says.  This day is not about religion – although some will choose to mix the two if they wish as I did, making the sign of the cross as I silently prayed for the people of Turkey.

I am very grateful to my husband for dragging me along and sharing this day in celebration with me.

Before we left, we actually got to see the full pomp and circumstance of the changing of the guard.  Below is a short clip.

I address the Turkish Army whose record of victory started at the down of the history of mankind and which has carried the light of civilization in its victorious progress.

I have no doubt that just as in the most critical and difficult times you saved the country from oppression, tragedy and enemy invasion, so today, in the fruitful era of the Republic equipped with all the modern weapons and means of military science you will do your duty with the same faith.

I and our great nation know that you are always prepared to carry out your duty defending the honor of our country and our civilization against danger, from inside our out.”

14 thoughts on “May 19th – Controversy Over a Turkish Celebration”