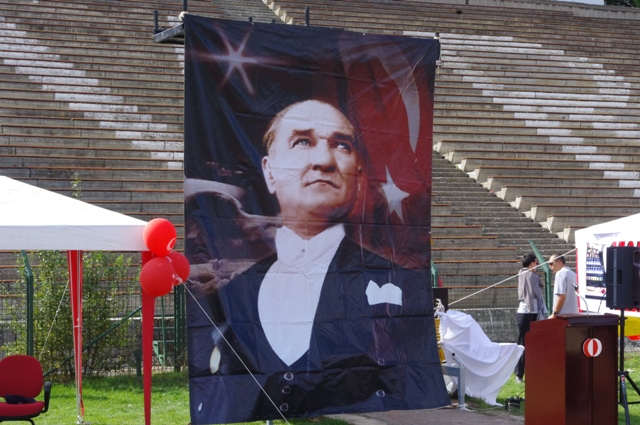 Friday October 29th is Turkish Republic Day, Cumhuriyet Bayramı.  On this date in 1923, Turkey’s constitution was amended and Turkey became a republic.  According to Wikipedia, a republic is a form of government in which the people, or some portion thereof, retain supreme control of the government, and the public head of government is not a monarch.

Kemal Atatürk made it his goal to make Turkey a democratic society, a more modern and western people, and separating Church from State.  As I’ve mentioned before, his picture can be found hanging everywhere, in public buildings, restaurants, schools, homes, and on the sides of buildings next to the Turkish flag.

People here celebrate the holiday in different ways.  There are often parades and live music.  In Istanbul, there are fireworks – just like the American 4th of July.  In Ankara, many people visit the Atatürk’s mausoleum.

While Atatürk called Republic Day Turkey’s most important holiday, there has been much turmoil in recent years surrounding the holiday.  In this secular nation today, women are forbidden to wear a head scarf in government buildings.  It’s been stated that more than 50% of Turkish women still wear the scarf.  Therefore, many women cannot partake in the holiday’s celebrations because they are forbidden to enter the stadiums and other similar “public” buildings because of the scarf.  The disagreements have been growing especially as the wife of the current Prime Minister continues to wear a scarf.  (See eg., http://www.csmonitor.com/2003/1031/p08s02-woeu.html).

Now you know, I don’t like to make firm statements of right and wrong when it comes to religion and politics.  But I will state my belief here based on my short experience of living in Ankara, what I have read, and what I have learned from others.

I don’t believe that all of these women are oppressed.  I don’t believe that they are an embarrassment to those women who are not wearing a scarf or to Turkey.  And finally, I can’t believe that all of these women and their families are turning their back on Atatürk.  Some of these women are very educated and have made an educated decision to wear the scarf.  Some of these women do it for religious reasons.  Others do it because they just feel more comfortable that way.  Heck, if you had to deal with my hair every day, you may want to wear a head scarf too!  And finally, I add what I have said many times.  Catholic nuns wear what is basically a full Muslim garb, a long black or blue dress with a veil.  Born-again Baptists (and other Christian women) wear a long skirt or dress to their ankles.  Amish women wear a long black dress with a cap.  Catholic women wore a veil to Church until the early 70’s.  And most American women still wear a veil on their wedding day.  Someone please tell me what’s the difference?

Please don’t read me the wrong way.  I am NOT for the oppression of women.  I do respect and admire all that Atatürk did for this country. I do not follow any particular political party (but I do love Obama!!!) I don’t believe personally that these women should cover their heads.  But I do believe that women should have a right to choose what they want to wear – except for security reasons.  I personally don’t agree with the removal of the scarf in government buildings — which includes its removal when attending classes at universities.  But I respect Turkey’s right to make their own laws and will abide by them accordingly.  I don’t know whether it’s the American in me or my own personal upbringing that puts me on both sides.  I can tell you that I just don’t see black or white on this issue.  There are always shades of grey.

And now – for something completely different!

After warming up, there were a few speeches including one by the President of the University.

The speeches were followed by the singing of the Turkish National Anthem.

And they were off!

The race was exhausting for some.  But all enjoyed the day.  Refreshments were served before and after the race.

Once the times were all calculated, awards were given to the top runners in a variety of categories.

Atatürk would have been proud this day!

One thought on “Celebrating Another Holiday – Turkish Republic Day”