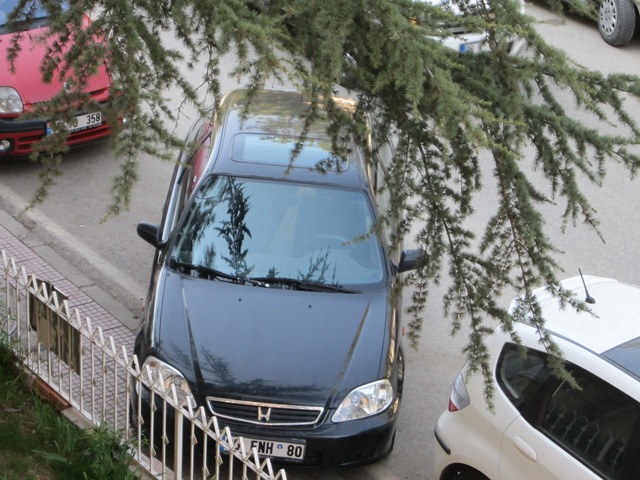 Since I was 6 years old, I have always lived on streets where folks must parallel park their vehicles.  My father was a truck driver and two brothers followed in that line of work.  So when it came time to learn to drive, believe me, I knew I had better learn to parallel park or suffer their wrath!

I got my permit the day I turned 16 and my license at 18.  I have owned 5 cars, all with a manual transmission, or as it’s known in the States, a stick shift.  One might assume that a stick is more difficult to park but it is not.  However, knowing your car, basic rules, and a little practice make it easy.

I actually learned to parallel park simply by riding in the cars of family members.  A long time friend often tells the story of a ride we took together in high school.  She came to town with her parents’ car.  When we went to park, she had no idea what to do.  So we changed places and I easily slid the car into the spot.  She still laughs about it because I didn’t even have a driver’s license yet.

Now, I live in a city of over 4 million people.  Parking is tight everywhere, although parking spaces are sometimes provided with housing.  But still, in such a huge city, I can’t believe that no one knows how to parallel park.  Here’s the vehicle of one woman who didn’t even attempt it.  She just drove nose in and stopped.

These shots are all photos of what I woke up to this morning.  This man had wiggled his car into a spot which I feel had plenty of room.  But he couldn’t get it.  He was turning his wheel in the wrong direction and managed to get stuck between the sidewalk and the car in front of him.

He actually left it in this position.  He didn’t even bother to turn his wheels in or close his side-view mirror.  The worst part was there was a car double-parked across from him.  Next came a car barreling down the street and didn’t slow down as he approached the two cars.  Pretty scary, especially since the passenger was blindly opening her door into the traffic at the same time.

Long after the man left his vehicle unattended, the driver of the double-parked car finally realized that it was a good idea to at least move his fancy VW a few feet forward.

The absurdity of it all.  He was in fact triple-parked, having parked next to cars that were double-parked blocking our building’s parking garage.  And next to No Parking signs none-the-less! This is exactly why we don’t pay to have a space in our garage!

It gets worse as one heads down our street towards the hospital.  Valet Parking blocks the sidewalk with cars.  They have roped off a portion of the street so that  guests can pull in.  They manipulate all of the free spots on our street.  They also create parking by pulling the cars in nose first.  They double and triple park everywhere.  And not once have I ever seen them pull a car into their parking garage!

Back in Philadelphia, these cars would all have been vandalized.  Granted, I can actually call myself a pro at this, needing no more than 6 extra inches to pull an SUV in nicely.  But in Philly, I would sometimes have to circle for 45 minutes to find a spot, and then push it in as if I went in sideways, never touching a bumper.

So here’s a few tips for those of you who need the help:

1- Always back into the spot unless it is really huge, more than 2 car lengths.

2- To back in, pull your car all the way up next to the car that will be parked in front of you.

3- Lower your side-view mirror so you can see the sidewalk!  I can’t emphasize this enough!  It makes the whole process so much easier.

4- Turn your steering wheel toward the curb to gently back in and then in the other direction to level it off, parallel to the sidewalk.  Reverse the wheel again to pull forward.  Rock it to and fro to get it just right (forward and backwards.)

Step 4 is the hardest.  You need to practice in order to get that car on just the right angle.  The side-view mirror helps.  It’s made more difficult if the car in front of you is hanging out too far from the sidewalk.  Use the car behind you as a guide.  Looking over your shoulder, point the middle of your car towards the middle of the car behind you.

So I leave you with two more tips:

1- If you don’t get it right the first time, pull out of the spot, all the way up next to the car in front of you, and try it again.  DO NOT pull part way out and attempt it.  You will get it done, but it will take much more time.

2- Don’t worry about the cars behind you.  By law, they have to wait – although they rarely do in Ankara.  And don’t worry about being embarrassed.  You likely don’t know the folks who may be watching, and they likely can’t parallel park either.

Here’s a great video on how to do it:

And finally, once you get the hang of it, please do not leave 5 feet in front of you and behind you.  If you live in a city, that is precious space!  All you need is a few inches!  And besides, you may irritate folks who may have the urge to let the air out of your tires or worse!

36 thoughts on “Tips on Parallel Parking”

Leave a Reply to Adventures In Ankara Cancel reply