Anyone who says they “know me” knows two things about me.  1 – I am far from being vegetarian, and 2- I can cook a meal from nothing.  Literally.  Today, the two finally came together.

As I was working from home today, it was getting close to the hour where I usually say to myself, “Self, it’s time to make the house look nice and neat and cook something to eat” so that the hubby thinks I have been slaving away all day to be a good housewife.  Yeah.  That’s what I say!

It was getting late, so I decided to forego the fake house cleaning. I skipped going to the market.  It had been raining all day.  At one point it hailed and the garden looked like it had snowed.  Later, it hailed golf balls.  No kidding.  Of course, this is my excuse for not going to market today.  I have no excuse  for yesterday, the day before that, the . . .

Anyway, I headed directly to the refrigerator. It didn’t look good.  (It didn’t look clean either, or I would have taken a photo for you.)  Plenty of condiments.  Half a head of lettuce.  A few tomatoes.  Fresh parsley and mint – that were on their last legs of “freshness.”  A few eggs.  Labne.  Some cheeses.  Olives.  A bucket of yogurt and plenty of insulin.

I moved on to the freezer.  Another strikeout.  Frozen pizza which I had for my breakfast/lunch.  Manti which I had several times recently.  Ice cream.  And very old beef – the kind that I am starting to feel guilty about not cooking earlier for the street dogs.

On to the cabinets.  Plenty of Italian pasta.  But the hubster might bump me on the noggin if I cook that again.  As I looked around, I heard the voice of my kanka in my head.  She was just telling me about how much brown rice she found in her cabinets while she was organizing.  And lo and behold, there it was.  The answer to my dilemma.  Red lentil and bulgar (cracked wheat.)

I quickly started scanning the internet and found this recipe. (Scroll down the link to Lentil and Bulgar Croquettes). Who would have thought that I would have all of the ingredients for Mercimek Köftesi in my house?!  Somehow I started craving the vegetarian dish.

A side note about my vegetarian cravings.  They are very limited.  Peanut butter and grape jam.  Mom’s scrambled big pancakes (thick crepes) with cucumber salad.  And most Thai food.  Weird, I know.  But I much prefer Thai food with tofu, rather than chicken or shrimp.

I made a few substitutions to the recipe, as the ingredients can vary depending on the area you are from.  I’m not sure what my mother-in-law would put in it, but the thought of cinnammon in the kofte made me want to gag.

UPDATE April 2019 – It appears the link is not working, so try this one from Almost Turkish.

I had no scallions, so I used a regualr yellow onion finely chopped.  I subsitituted cumin for the cinnamon.  I added some jalapeno juice for a little kick.  And I happened to have pomegranate juice on hand, so I skipped the balsamic vinegar. 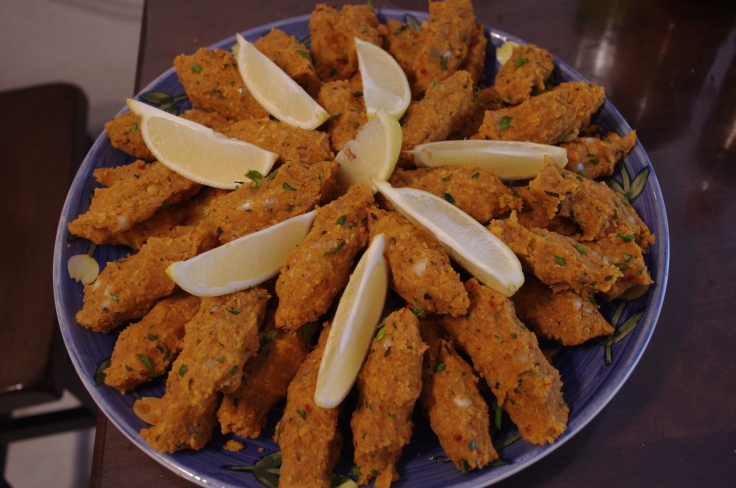 All plated up, they will be served with a squeeze of lemon and wrapped in leaves of lettuce.  Mercimek Köftesi is also nice served as a snack with hot tea.

The old man still isn’t home.  Perhaps he went for a run.  Right.  He runs in the rain and I can’t walk a block to the store.  Whatever.  Since there is time, perhaps I will make a side of cacik (something like Greek Tzatziki) with that lovely yougurt he made for me!  But wait.  I don’t have a cucumber!  Perhaps he will call to see if I need anything.  Smiles.

I bet those who “know” me are still laughing over the idea of my not eating meat for dinner!  Funny, I know.