Along the road to Kaş, on that first day, we passed several Jeeps on the road.  It didn’t take long to discover they were on safari. Ha!  Safari!  I remember walking into the office of Xanthos the next day and point-blank asking one of the owners, “What kind of animals do you have in these parts?  We have a lot of cats and dogs up north in Ankara.”  Laughing out loud.

Well, it wasn’t about the animals, although we did see cats, dogs, turtles, frogs, birds, and a blue crab scattering across a restaurant floor.  The day was fun.  No, it was one of the most fun days I have had in a very long time.  Here’s how it went:

We met around 9:30 a.m. at Xanthos’ office in Kaş.  There, our tour guide, Özgür, led us to our jeep.  Along the road, we were joined by another jeep.  No one said much, not even Özgür.

Our first stop was a small gorge, just outside of town.  The road was sort of a bridge there, the gorge up on one side leading to the beach down below on the other side.

The next stop was the beach at Patara.  I had been before, so no big deal, right?  Wrong.  Özgür provided us with the most amazing description of the history of Patara. He did it in both Turkish and English.  He spoke for at least 40 minutes.  He really knew his stuff.  Fascinating.  We had time to swim at Patara and of course, enjoyed a glass of tea.

As with my other posts, I will let you research the history of the area.  This trip involved visits to four gorges; the history of the ancient Lycian city Patara; talks of the Roman period, earthquakes, the hitites from Anatolia, the first Parliament building in history, democracy, wines, the Croatian war, Alexander the Great, Babylon, the 5 King Period, the Hellenistic Period, Caesar, Brutus, Byzantine, Orthodox and a Seljuk attack.  Whew!

I will share one of his stories.  A couple of years ago, a group came to study the turtles.  About 5000 eggs are laid on the beach each year – and are very well protected.  Some of them received microchips.  Tracking showed that some of the turtles swam to Egypt and back!  That’s probably about 1000 km each way!

After the swim, we headed back to jeeps.  Shortly thereafter, we made a pitstop “where Santa buys his toys.”  Yes, Patara is the birthplace of St. Nick.

For some unknown reason, at least unknown at the time, our guide was pushing us to buy water guns.  The are only 5TL!! What a deal.  Secretly, I wanted one so that I could attack the two boys staying in our apartment building the next time I saw them at the pool.  Turns out there was a reason for the guns, and it was WILD!!!  Warning, it’s a long video.  With a few minutes you will catch my drift. 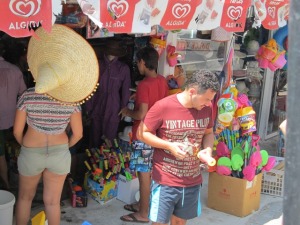 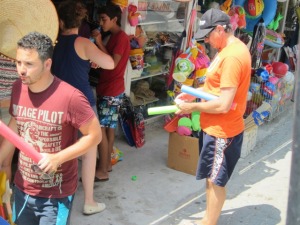 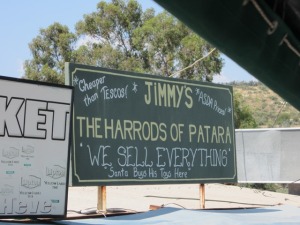 Wow, that was a long video, and a long day so far.  So we stopped again.  At the ancient city of Patara, home of the world’s first Parliament building.  Here, Ozgur’s stories came alive.  And it was a chance to try eating cactus for those who were so inclined! 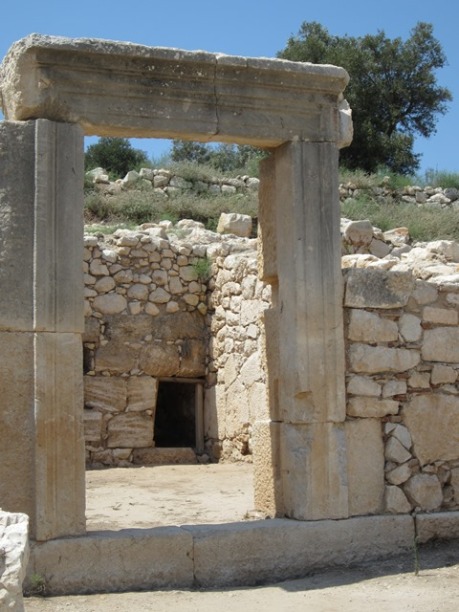 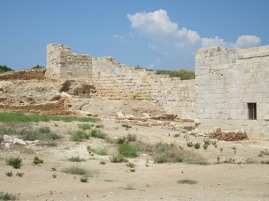 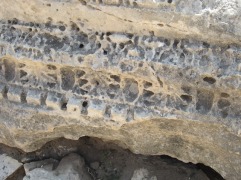 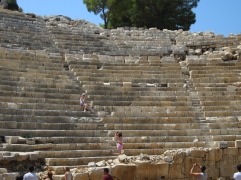 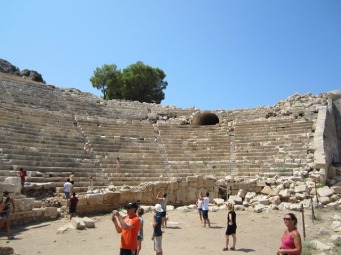 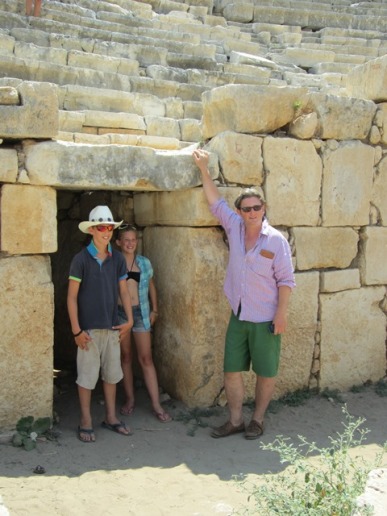 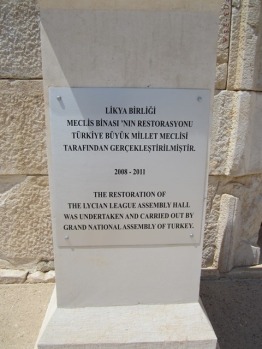 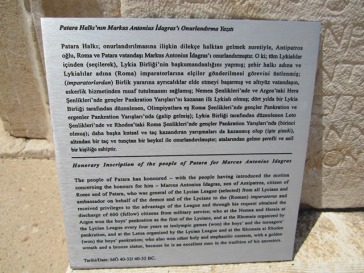 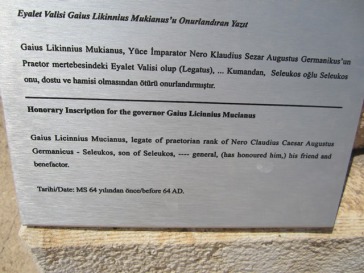 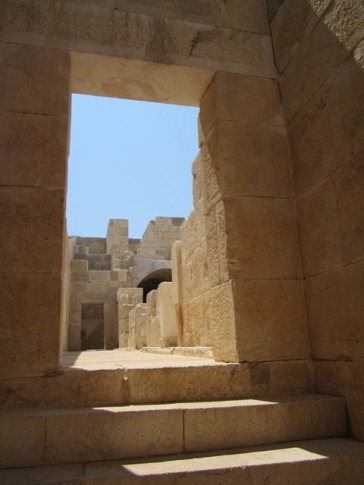 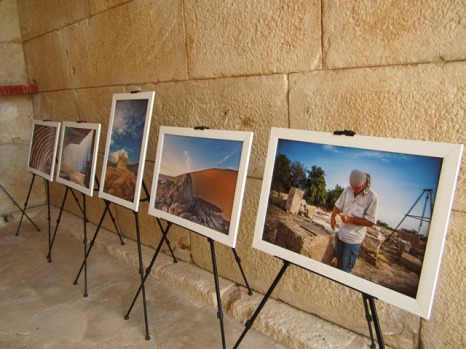 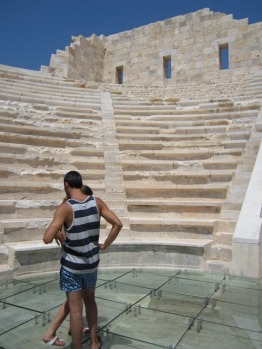 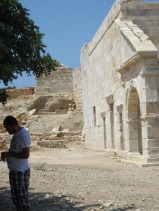 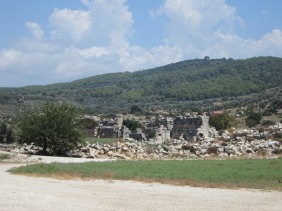 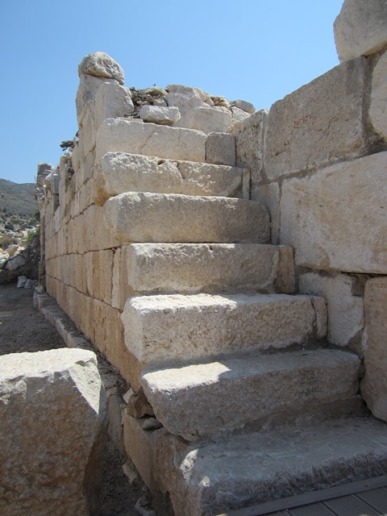 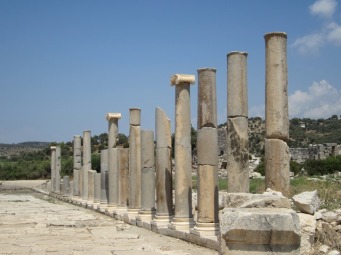 Did I say this was a long day?  It was 3:30 p.m. by the time we were served lunch.  We had driven to a hidden spot, along the water.  We laid back on Turkish style rugs to rest.  We sat cross-legged on pillows at low tables while we were served fish and chicken kebab.  A well-deserved rest.

After lunch, we split into two groups.  The first group did a rafting tour (at a small extra fee) while the rest of us stayed behind and drank tea.  Once they returned we headed down a very long set of stairs.  I forget the count, but I think it was around 300 steps.  Oh well, at least it was down.  And so the best part of my day began.  The trek to Gizlikent Gorge.  The waterfalls were awesome.  The greenery, the rocks.  It was all so cool.  It was here that I took the ALS Ice Bucket Challenge, sans ice, but with icy cold waterfalls!! 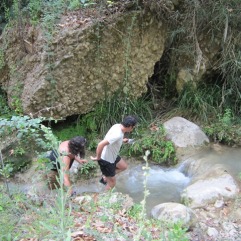 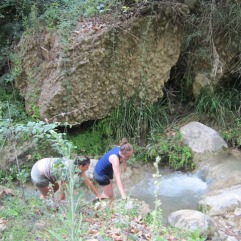 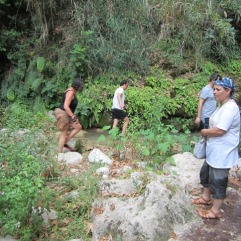 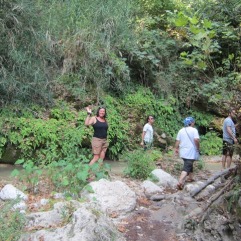 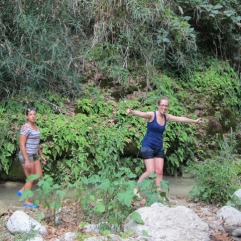 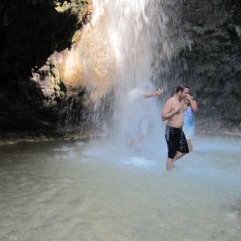 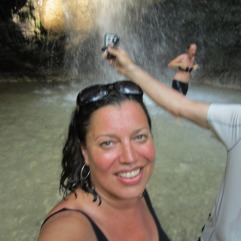 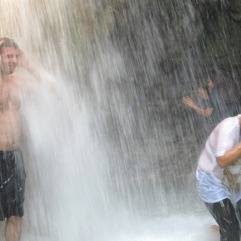 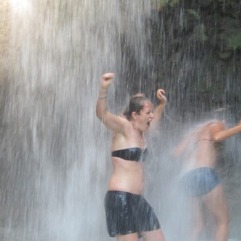 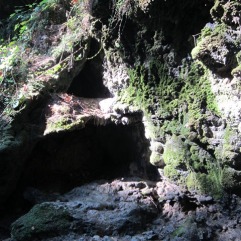 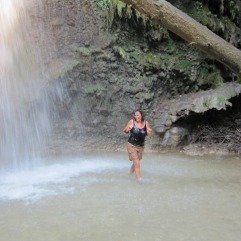 We had another guide for that part of the trek, Alim, a little older than the others and a former tailor.  He didn’t speak much English, but he was a lot of fun and a real gentleman – helping Abla from time to time up or down the slippery rocks!  He also very kindly offered to take this short video for us . . .

Are you getting tired yet?  I was exhausted.  But we weren’t done.  The reason my husband wanted to join this safari was the guided tour of Saklikent Gorge  – so off we went.  Back into the jeeps we entered a much more “touristy” area of Saklikent. We had a third guide for this part of the trip.  The beginning was almost scary.  The water seemed colder than the other gorge. And it was bigger and moving.  So here we were, about 30 in total, holding hands to cross the first “pond.”  It was deep and beautiful, not green like the other.  Mammoth rocks cut through the water.  I made it through most of the gorge before I planted myself on a big rock with a few others while the group pushed ahead.  I knew we still had to make it back to the jeep – and there weren’t going to be 30 of us holding hands to cross.  I was so tired by that point that nothing scared me.  It was fabulous.

Here’s the whole day in a 6-minute video:

One would have thought they were done.  But no.  There was still the drive back to town … and a pit stop.  Both jeeps pulled over at the first crime scene, the beach between Kas and Kalkan, at the foot of a small gorge.  While many made the way down to the water for an evening swim, I stayed with the crew on the side of the road and enjoyed watermelon.

Özgür has been with the company for 7 years, and in the industry for 9 years.  Clearly, he enjoys it.  He was a history major at university and his knowledge of history really shined.  His “likes” include the variety of international guests he takes out on adventure.  Unlike Antalya where tourists are mostly German and Bodrum where they are mostly British, Özgür has met a variety of international clients in Kas.  On this trip alone there was one American, a few French women, and several Brits mixed in with the Turks.

He also enjoys canyoning (coming soon) and body rafting.  He is training for rock climbing, perhaps trying to catch up to his cousin who is on the National team???  There is really only one thing he doesn’t like about the job and that is when someone is not on time.  Xanthos is a well-oiled machine.  With so many adventures, vehicles, and employees, they have to be organized, they have to be punctual.

The strangest thing he ever saw was on the way to Gombe.  The jeep became covered in darkness.  An eagle had actually flown above the vehicle, wings outstretched, as large as life itself.  A snake hung from its mouth.

Özgür has traveled the world to places such as Cambodia, Thailand and India.  Next up?  France, Italy and South America.

IF YOU ARE GOING:

NOTE:  I realized after writing this that the events are out of order.  We stopped at the beach, then Patara Beach, the ancient ruins before the water fight.  We moved on to lunch, Gizlikent, Saklikent and back to the beach.

Read our other posts on Kas here:

8 thoughts on “Oh, the things we did!! Jeep Safari in Kaş”