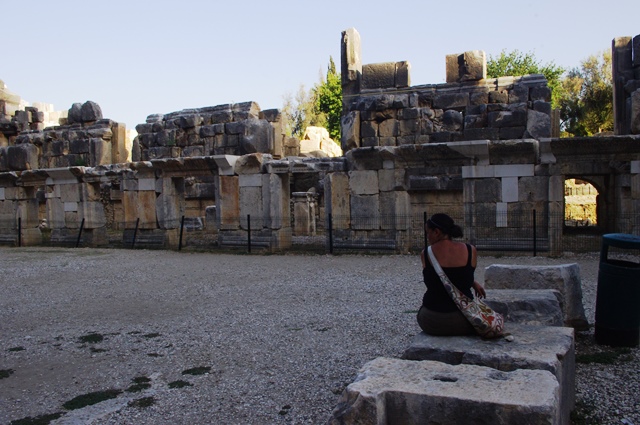 The Middle
Wow, what a week I had!  Tomorrow I will start blogging the “good” of it.  A week spent in the lovely town of Kaş, on the Turkish Mediterranean.  It was awesome!  We rented a lovely little apartment on the peninsula, right at the sea. We met a lot of interesting and great people. And we spent the week going on fantastic adventures with Xanthos Travel.

The Beginning
But, the week started out ugly.  We were about three hours into the journey from Ankara when I got a message that a friend had passed away.  Fulya was part of the English conversation group that “adopted” me early on.  She was my Abla.  Always kind.  Never a negative word to say.  Down-to-earth and yet, worldly.  A real lady.  Her photo hangs on my refrigerator next  to one of all the girls.  She is greatly missed.

The End
We enjoyed the drive back to Ankara, stopping along the way.  We ate corn and drank tea with goats!  We bought fruits, vegetables, and capers from a roadside stand.  We stopped in Afyon to buy Kaymak Şekeri.  I almost always do the inter-city driving once it is dark and this time was no different.  As the Sunday night summer traffic got a little more crazy, I remember my husband even thanking me for driving so safely.  When we got home, the first thing we realized was a traffic citation was waiting.  (Yes, I drive safely, but have issues with red lights.)  And then it turned bad.

Our home had been burglarized.  It wasn’t as bad as it could have been.  Our television was gone.  Brand new watches, gone.  Bottles of wine and liquor.  Most of my jewelry was gone.

The worst of it was not a feeling of violation, as one might expect.  I’m getting quite used to being violated in Turkey.  This is, in fact, the third time for me!  The worst is the loss of those things that can’t be replaced.  The gold and pearl earrings from India – the ones my sister gave me because I admired them on her so much – one of the few things I had from her, the sister who died last December.

The emerald and diamond ring from my other sister.  The one she got from her boyfriend when she was 21, 40 some years ago, and gave to me several years back when she married.

The ruby ring my mother gave me in grade school.

The crucifix on a chain from my grandfather, given to me for my First Holy Communion.

The first pieces my husband gave me.

I could go on, but these things are gone.  They are good memories now and believe it or not, I had actually photographed most of my things a couple of years ago.

So I have photos and memories, just as I do of Fulya and Eileen.  Chin up.

9 thoughts on “The Good, the Bad, and the Ugly”