Life has been so busy lately.  Trips, parties, illnesses, stress.

Life is what we make of it.

I’ve never been a person that put friends and family on a back burner.  They always have and always will come first.  Even when they irritate me.  Now, I sometimes find myself juggling which friends and which family come first.

Work?  I have been lucky enough, to date, to have bosses that put up with me.  After all, I work my ass off when I work, and I always get the job done.  But this too is becoming more difficult.

Yesterday, I lost another friend.  This one actually, more like family.  So what do I do?  Do I fly back home less than two weeks after I left?  Do I go take care of my “family”?  Or do I stay here, not spending money that I really shouldn’t be spending, earning a little mre, and not disappointing employers?  What do I do?

Life is what we make of it.

This is Dawn on my wedding day, three and a half years ago.

And here she is with her husband (and my buddy, John) and my silly sister Dee. 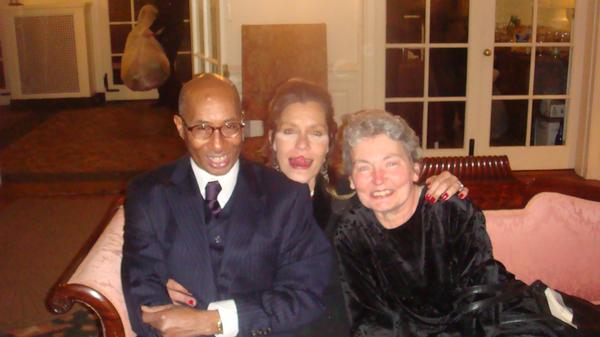 I don’t remember exactly how we all became friends.  Dee and some of my older siblings knew John back in the day.  I remember first meeting Dawn (although I may have before that) when I started college.  They were in WC and offered me a ride back to the city after a weekend at home.

Then I went to law school and met Brenda.  She was from the city, but married a WC man who happened to be best buds with John.  John, like Brenda and I, had gone back to school later in life to become a lawyer.  So the three of us had much in common.  Albeit, they went back to school later than I did. 🙂

I don’t recall if that’s when I started hanging out with John & Dawn, but after law school, I moved to the city.  They lived two blocks away and took me under their wings.

From this point, when I “re-met” Dawn, we were family.  They kept an eye on me and I did the same for them.  Dawn had been struggling for many years with Lupus.  She bravely took the bus to and from work every day, only to spend her evenings laying in bed exhausted and in pain.

One day, after a conversation with me, she took it upon herself to cut out one of her meds.  Although this was not something I suggested, we were both delighted that Dawn was finally up and running!

After I moved to Turkey, Dawn valiantly fought breast cancer.  This was the first time since she rose above her pain, that Dawn was silenced again.  I am told that she didn’t discuss it.  She knew I knew.  But there wasn’t much other than that.

I visited her on my trips home, but not this last one.  I regret that.  I hear John’s voice in my head telling me to visit her.  I didn’t know.  I had so little time.

I’m still not clear on what happened yesterday.

I sit here alone.  Not wishing that I didn’t live in Ankara.  Rather, wishing that I could be everywhere all of the time, making everyone happy, or at least trying.

I hear her voice, telling the story of the time I asked if I could cut her meat for her.  How she laughed when she admitted that she gladly accepted the offer.  I hear her yelling at the television when football was on.  I remember how angry we would be when we would send her son out for food.  It took hours.  And then how quickly we forgot about it as we enjoyed the meal. Dawn was a woman who put a lot of thought into the gifts she gave; the Asian tea pot because she knew I drank tea with “B”; the miniature tea pot because of the similar items I had collected.  I hold the books she gave me by Obama.  And I know how she will vote tomorrow.  Everyone knew.  There was no hiding that.

Below is a pic of a plate decorated in chocolate, cradled in Dawn’s hands. She said it best, “Bon Voyage.”  Farewell my dear, dear friend.  Until we meet again, know that I always loved you.