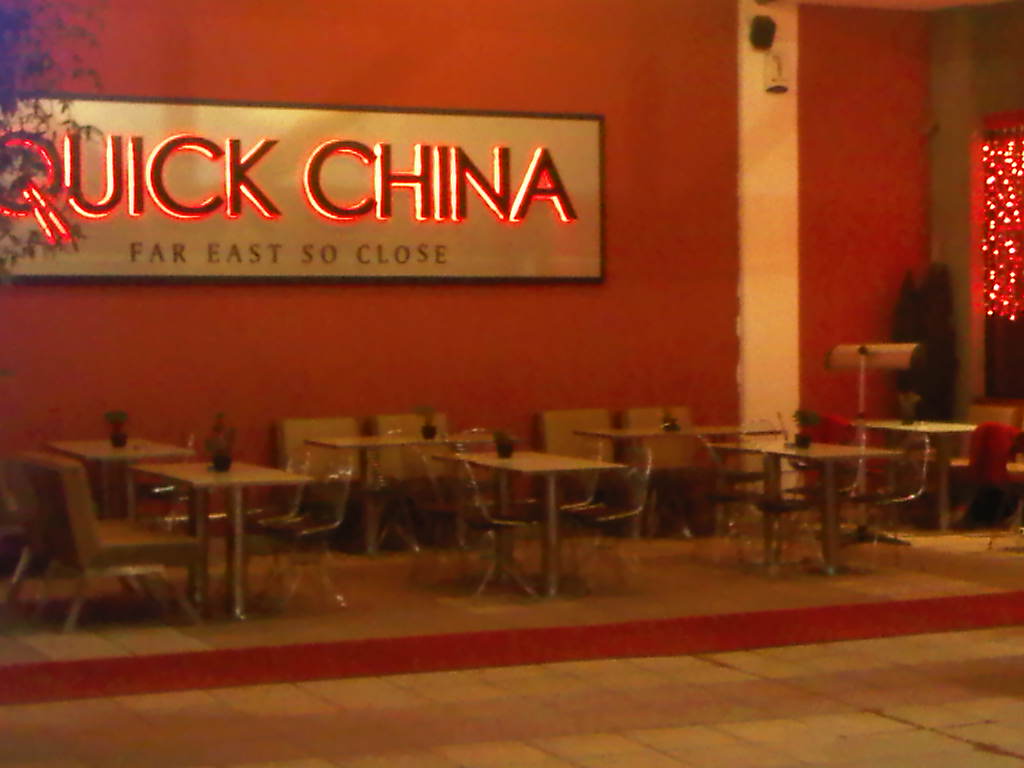 When I first visited Quick China in G.O.P. (Gaziosmanpaşa), I was unprepared to review it.  I had gone with a new friend to check out the lunch buffet and drink wine.  So that’s what we did.

Recently, I had the occasion to visit Quick China again, this time at its Bilkent location.  In Ankara, Quick China has three locations:  G.O.P., Bilkent,  and Çayyolu with a fourth location in Nişantaşı Istanbul.

The Bilkent location is in a shopping mall.  Back in the States, eating at a shopping mall meant fast food.  Even when a restaurant claims to be upscale, I expect absolutely nothing from my meal at a mall.  I realize that in other areas, shopping malls are acceptable places to dine.  But in Philly, well, it’s just not done.  Call me a snob.

The entrance to QC’s Bilkent restaurant was typical Ankara mall dining – cozy outdoor seating surrounded by a not-so cozy parking lot.  However, the interior of QC  was quite chic.  Booths were dimly lit with subdued red light fixtures dangling from the ceiling.  A sushi bar in the middle of the room allowed for guests to watch the cooks in action.  The restaurant was filled with a younger crowd (late 20’s and 30’s) but all age ranges were  accounted for.

My husband and I dined on a weekend at lunch time.  Apparently, QC doesn’t have a special lunch menu on the weekends.  By “special” I mean lower prices.  Bilkent’s QC also does not do a buffet as its other locations do.  So we chose from what I consider a rather pricey menu.

I should take a step back to comment on my two most consistent facts about Asian food.  One, in the States, I would NEVER go to a restaurant that combined Chinese, Japanese, and Thai foods.  These cuisines are not the same.  Other than the menus containing rice and noodles, I don’t even consider them similar.  However, in Ankara, there is really not much choice.

Secondly, in the States and many other countries, Chinese and Thai food is very inexpensive.  Japanese cuisine is a different story because of the fish.  But rice and noodles are cheap staples and should also be in Ankara.   QC is obviously catering to foreigners who generally earn a better wage than the common Turk.

Not wanting to spend too much of our paychecks on one lunch, my husband and I settled on Thai dishes.  He had a rice with crabmeat and I went for a Pad Thai.  First things first – I noticed there was tofu on the menu, but not as part of any of the main dishes.  I asked that they substitute tofu for the chicken in my Pad Thai. While the waiter looked somewhat puzzled by this request – probably partially because Turks don’t ask for substitutions often and partially because who in their right mind would ask for tofu instead of meat – the waiter promptly forwarded my request to the manager.  The manager, just as puzzled, checked with the Chef.  They would have been even more puzzled had they known that I am one of the biggest meat eaters known to mankind!  Yet, alas, my request was granted and I was served a lovely Pad Thai with tofu! (15TL).

I was pleasantly surprised that my Pad Thai came with a decent amount of vegetables and the crushed peanuts on the side.  A friend of mine has a nut allergy so I’ve become more sensitive to this kind of thing.  Of course, if they cooked the noodles in peanut oil, serving nuts on the side wouldn’t have been any help.  The dish was a perfect balance of flavor.  The tofu lightly grilled to perfection.  My only grievance is that it could have been a tad spicier – but that’s just a personal preference.

My husband’s meal of rice with crabmeat (14TL) was a bit of a disappointment.  It was good, but just not much of a meal.  In choosing the dish we relied heavily on price.  And as most Turkish menus go, QC’s menu had little to no description of the dish.  The meal was basically fluffy white rice (not sticky) with a light flavoring – probably coconut milk and basil.  There was a light sprinkling of vegetables which included delicately grilled yellow corn kernels.  That was my favorite part.  The biggest disappointment of the dish was the crab.  I should have known better.  The crab was likely imitation and was pulled into thin strips.  It had no flavor at all.  The dish was not what we wanted for lunch:  too light and too hard to eat with chopsticks.  But in all fairness, it was still good.

Prices of drinks were also high.  10TL minimum for a glass of wine.  8TL for a beer.  We settled on water for an outrageous 2TL per bottle  (compared to 50 kur. we paid at a small Aksaray place) and a soothing and hot jasmine tea (10TL).  The tea was served in a porcelain pot with cups for 2.  It was just what the doctor ordered on a cold winter afternoon.

The service was quick and the waiters very pleasant, professional and helpful.  As with restaurants everywhere, the removal of my empty dish from the table before my husband was finished his meal irritated me.  But most waiters do not realize that this is a faux pas and frankly, most restaurant guests don’t know it either,

Overall, I was very satisfied with my dining experience and would  recommend this restaurant.  Service was good.  The restaurant was clean and attractive.  The food was very good.  The prices are what you expect to pay at a higher end restaurant in Turkey – not for an everyday meal.  I give it  4 of 5 Terrybells!  Well done QC!

Additional Notes:  My prior experience at GOP was also very good.  The outdoor seating is much more private than the GOP parking lot.  I highly recommend the buffet.  I tried the sushi and it was delicious.  The lunch buffet includes wine.  The GOP restaurant also does a dinner buffet on Friday, Saturday and Monday evenings.  QC also delivers.

Click on the links above for restaurant information or check out the Culinary Corner.