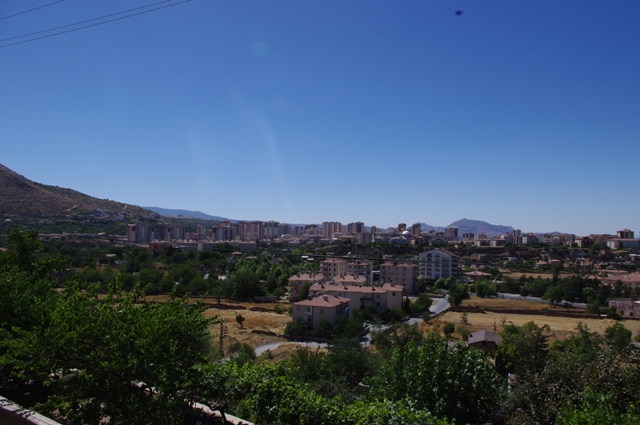 The month of Ramazan (Ramadan) will be ending next week.  Ramazan is the ninth month of the Islamic calender, a time for fasting and special prayer.  During the month, muslims fast from sunrise to sunset.  They ask forgiveness for past sins, pray for guidance and help in refraining from everyday evils, and try to purify themselves through self-restraint and good deeds.

The Islamic calendar is a lunar calendar, therefore, the month of Ramazan moves from year to year.  This year, fasting is particularly difficult for devout Muslims since Ramazan fell in the hot and long days of August and September.  We have not had rain in Ankara for more than a month and the weather was consistently over 100 degrees fahrenheit for most of the month.  I find it remarkable that people can last a day without water in this heat.

Some muslims are excused from fasting.  The exceptions include the elderly, the sick, pregnant women, and those with diseases like diabetes that would cause health issues during a fast.  Those who don’t fast usually try to make other offerings to God, by doing good deeds such as feeding the homeless.

During this month, we went to vist my brother-in-law and his wife in Kayseri.  Due to health reasons, three of us were not able to fast.  This made it a bit difficult for my brother-in-law who was fasting.  However, he was a good sport – showing us the city and preparing some of our meals even though he couldn’t partake in them.

There were two things that I found particularly enjoyable in visiting Kayseri during Ramazan.  The first took place on our first evening there.  After sunset, we drove about 10 minutes up Mount Erciyes, the largest mountain in Central Anatolia.  There we went to dinner at an outdoor restaurant that overlooked the city.  (Unfortunately, I forgot my camera.)  The views were breathtaking.  Much to my amusement, I was very cold sitting out on the terrace.  Luckily, my b-i-l brought spare jackets and the restaurant provided blankets.

What I enjoyed about the restaurant was how they catered to the clients.  During Ramazan, there is a set menu — because people are HUNGRY by sunset!  All the tables are filled at the same time, making it difficult to serve.  Tons of meze (appetizers) and salads are already set on the table before customers are seated.  Warm fresh bread is brought out directly.  The waiters did an amazing job of catering to so many customers at once.   There were several choices of main courses (grilled meats) which were served family style.  We chose lamb chops.  After dinner, Turks always finish with a glass of tea and sweet desserts.  The tea came quickly being served in a thermos so customers could help themselves without waiting.

The second thing I enjoyed about Kayseri was that I experienced a Ramazan tradition which I had heard about, but not experienced in my Ankara neighborhood.  The fasting Turks will usually wake up an hour or so before sunrise to eat breakfast to help sustain them throughout the day.  To assist them in rising so early, there are official drummers that come through the neighborhood, banging on big drums to wake everyone.  Now, considering my husband and I are not able to fast, this would have been really annoying to hear this every morning in our Ankara neighborhood.  But hearing it one time in Kayseri, really brought a huge smile to my face.  It went on for about half an hour, getting closer and closer.  Believe it or not, my hubby slept right through it.  I wish I wasn’t so lazy and had jumped out of bed with my camera in tow!  It was really fascinating.

I must note that they apparently do beat drums in our neighborhood.  But I sleep next to an open window and I have never heard them!  However, a couple of nights ago, someone came knocking at our door collecting money.  Apparently he was the drummer and we were supposed to pay him for his work!  My husband politely explained that we have never heard him.  His response was that he stops before getting to our building because the hospital is two doors down!  I found that to be a riot – “Hey, I don’t do my job for you, but can you pay me anyway?”  LOL.  Of course, my kind husband gave him a small donation anyway.

Rising the next morning, my brother-in-law set us up with a big and delicious breakfast!  We followed that with an hour or so of carpet shopping.  (After more than 5 months in Ankara, my family is really insisting that I buy carpets and curtains!)

He then drove us to a neighborhood that hosted an old Armenian church which had been converted into a mosque.  (Somewhere on that hill is another Armenian church that is still in operation – but we couldn’t find it.)  Turks are not known for keeping old buildings in good shape.  So this one was pretty amazing given its age.  It was built in 1886 and converted in 1925.

Following that was a trip to the races.  My husband and his brother had a blast for about 20 minutes, racing each other on a local racetrack!

We followed this with a quick trip to the mall and the food court.  Again, my brother-in-law charmed me by getting our meals while he sat at our sides, making conversation and not eating a thing.

At the end of the day, my husband and I enjoyed the 4 hour drive back to Ankara.  Taking in the sites along the road.  Watching out for speed traps.  And singing along to some of our favorite CDs.  (Okay, I sang.  He grimmaced.)

Thanks to Koray and Özlem for being such wonderful and gracious hosts!