This is a lovely recipe of white asparagus and ham, first prepared for me by my cousin Alois and later by his brother Rudolf.  It can be served for lunch or a light dinner.

Trim the ends from the asparagus and shave if necessary.  This makes it less stringy.  Steam it in a frying pan  in shallow water until tender.  Remove from water and set aside.

Lay out a slice of ham.  Top it with a slice of swiss cheese.  Top that with 3 or 4 asparagus spears and roll it up in the ham and cheese, with the ham being the outer cover and the cheese inside , between the asparagus and ham.  Use a toothpick to keep it bound.

Remove the water from the pan if you haven’t already done it.  Add a few pats of butter or margarine.  Place the asparagus rolls in the pan.  Brown them and roll to the other side for browning.  Remember, the asparagus is already cooked. 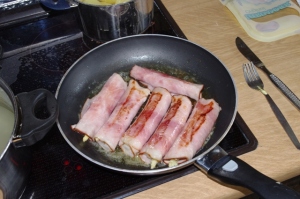