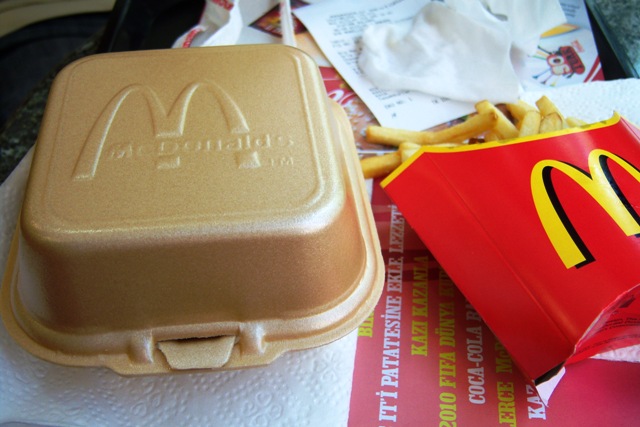 We are all fans of McDonald’s.  Sure, go ahead, claim that you are not.  You can argue that it’s not a real burger.  But we don’t go to McDonald’s for real burgers.  We make those at home on the grill.  We go for the two all beef patties, special sauce, lettuce cheese, pickles, onions, on a sesame seed bun.

Our children go for the ketchup.  They use the french fries as their vehicle, as a means to an end, a tool to harvest the ketchup.

Go ahead, say you don’t like McDonald’s.  Forget about those greasy sausage bisquits.  The deep fried McNuggets with sweet and sour sauce.  The ease in knowing what to order.  The joy of having some change left in your pocket after filling your belly.  We like it.  We’re American.  We’re German.  We’re Turks.  We eat at McDonald’s.  The whole world eats at McDonald’s.  “Each day 22 million customers buy food in 11,000 of its outlets in 52 countries.”   http://www.time.com/time/magazine/article/0,9171,970470-1,00.html

Sometimes we boycott.  We diet.  We say we aren’t going to do it.  But those fries keep calling us back.  Well, as much as no one who knows me will ever believe I am saying this, ENOUGH IS ENOUGH ALREADY!

I recently ate at McDonald’s in Kavaklidere, a hipster neighborhood located in the heart of Ankara, Turkey.  It wasn’t my first time eating at a Turkish McDonald’s.  I had been before, ordering the cheeseburger, small fry, and small Coke – the kid’s meal without the toy.  This time was different.  I wanted, nay, I needed my Big Mac.  So I ordered just that.

I was thoroughly disgusted, embarrassed to be American at the sight of my sandwich.  It came out quickly.  It was hot alright.  It had all the right ingredients.  But there was one big difference from my American burger.  It was served in a Styrofoam container!  I could have died.

Just two weeks ago, Time Magazine reported that “(a)n estimated 30% of the food is wrapped in polystyrene packages, which means that McDonald’s customers toss out more than 45 million lbs. of so-called clamshell boxes and other polystyrene waste each year.” http://www.time.com/time/magazine/article/0,9171,970470-1,00.html

In 1987, twenty-three years ago, Richard M. Kessel, executive director of the New York State Consumer Protection Board, wrote to the corporation’s chairman, Fred L. Turner stating that McDonald’s could perform ”a great service to the state of New York” if it would ”discontinue Styrofoam packaging and instead expand its use of paper products made from recycled material.” http://www.nytimes.com/1987/11/11/nyregion/mcdonald-s-is-urged-to-alter-packaging.html?pagewanted=1

Three years later, “(o)n August 1, 1990, the McDonald’s Corporation and Environmental Defense Fund joined forces in a unique collaboration:  the nation’s largest fast-food chain and a leading environmental advocacy group teamed up to conserve resources and cut waste.  This fledgling partnership with a leading brand grew into one of Environmental Defense’s core programs.” http://www.edf.org/page.cfm?tagID=1448

As a result, McDonald’s “(s)witched from polystyrene foam ‘clamshells’ to paper-based wraps for its sandwich packaging, providing a 70-90% reduction in sandwich packaging volume, reducing landfill space, energy used and pollutant releases over the lifecycle of the package.”  http://www.edf.org/page.cfm?tagID=1448

“In 1999 McDonald’s announced that it had reduced 510 million kilowatt-hours through energy efficiency improvements in its stores and created a ‘buy recycled’ program, purchasing nearly $3 billion in products containing recycled materials.” http://www.edf.org/page.cfm?tagID=1448 It’s 2010.

Times have changed for all of us.  The U.S. has an African-American president. Germany is run by a woman.  Turks are forbidden to wear head scarves in government-owned buildings. McDonald’s, however, is turning back time.

I turned over my container.  There before my eyes, in the middle of a recycling triangle, was the number “6”.  The first thing I did upon returning home was to google it.  “Plastic #6: this is polystyrene, or Styrofoam, from which disposable containers and packaging are made.  You’ll also find it in disposable plates and cups. Evidence is increasingly suggesting that this type of plastic leaches potentially toxic chemicals, especially when heated. I suggest avoiding the use of #6 plastic as much as possible.  It is difficult to recycle and most recycling programs won’t accept it.” http://ecovillagegreen.com/2009/04/what-do-the-plastic-recycling-numbers-mean/

Philadelphia only recycles numbers 1 and 2.  Philadelphia is currently the sixth largest U.S. city with a population of approximately 1.6 million.  Ankara’s population is 4.7 million.  I don’t know what they recycle here in Ankara.  But I promise you, it is NOT #6 Styrofoam containers!

My message to McDonald’s:

My message to Burger King:

Yes, I frequent your establishments more often than McDonald’s in Ankara because you are cheaper.  I’m the tall one who always orders the Whopper Junior meal.  But next time I visit, I’m going to order the Whopper.  So watch out!  If you serve it in Styrofoam, YOU WILL BE NEXT!